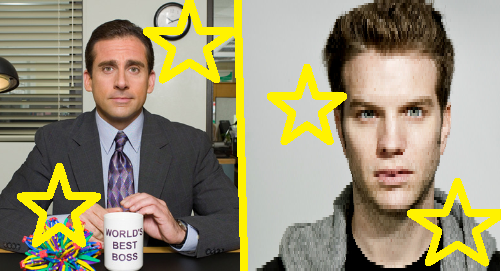 I am a straight, white, young male.

My demographic is far from underrepresented in the media, and because of that it’s treated as the default setting for the human race. I’m happy to notice that today’s television has more black/female/gay leads than ever before, and there’s reason to keep positive about the state of social equality, but there’s obviously still a ways to go.

As a Default-American I’ve always felt pressure to conform to a very regulated lifestyle, particularly in the academic and corporate settings, where the tracks are all laid out before you even show up. Older white men pressure you to conspire with them, to share in their smugness and the expectation that you’re among the “elect,” with a responsibility to second guess and micromanage the actions of women and people of color. There’s also an inherent privilege that comes with being a white male because of these well-worn pathways to success, obvious stuff like not getting hassled by cops or being trusted by shopkeepers, and less obvious stuff like growing up with a private backyard.

But chances are you’re already aware of critical race studies and the concepts behind white privilege. And this is not a social justice blog.

The trend I wanted to discuss is about how young, white men are portrayed in contemporary television. I’ve noticed two comedy archetypes that have been getting a lot of play on TV networks geared towards a younger, irreverent crowd. I call them the Evil Genius and the Idiot Genius.

The Evil Genius is the writer’s room response to the YouTube comments section and the frat house. His primary ability is offensiveness. If it involves sex or violence, he’s an expert, and if there’s any possible way to work it into the conversation he’s already said it. Daniel Tosh and Anthony Jeselnik are the epitome of this character. They use a cold, emotionless delivery to entertain all manner of bros on topics ranging from rape to more rape.

This guy is the rape culture your friends who read Jezebel warn you about. Whether he’s actually committed it or not seems irrelevant, because he’s cooly aware that it’s happening anyway. Guilt and shame don’t exist for him, or at least not in the same capacity as gratification.

Not all Evil Geniuses are simply hacky stand-ups that rely deeply on un-replenishing shock value, though. The evil behind Dennis (Glenn Howerton) on It’s Always Sunny is a realistic portrait of a sociopath: in the last season he became increasingly self-aware of how heartless he was, uttering the perfect quote (“I’ll go with to see if I can’t knock some emotions loose inside me.”) to encapsulates the struggle of a three-dimensional character who fully recognizes how two-dimensional his media landscape is.

Sometimes the Evil Genius isn’t as much of a serial killer type as he is just a party boy. The Rich Dicks characters on Kroll Show are a perfect pastiche of people who aren’t deliberately evil so much as they are oblivious and unaccountable (In one episode the Rich Dicks crash their car and after John Daly throws up on a kid’s trike he finds undigested Vicodin “So, I guess there was a little good in me”).

The Idiot Genius is a lot more realistic and well rounded. The Idiot Genius is a comedian playing a mook for a different kind of shock value. It’s not about being offensive so much as being embarrassing. It’s a martyr’s form of comedy: “I’ll let everyone shit on me, instead of shiting on everyone else.”

The classic examples are the Michael Scott (Steve Carrell) and David Brent (Ricky Gervais) characters on The Office. These middle-management types always have heartwarmingly pure intentions, but their hubris, low self-esteem, or other true-to-form personality flaws create a situation of painful awkwardness you can feel in the deepest reaches of your intestines.

My current favorite Idiot Genius is Nathan Fielder in his cult-smash Comedy Central show Nathan for You. If you haven’t seen it, it’s a hybrid of a scripted comedy and a reality prank show wherein Fielder gives insane business advice to real small business owners (though it should be noted there’s a predatory element in his selection of business run by immigrants and the elderly). Fielder’s character is played as a naive Aspergers patient whose social fumbling and desperation for attention feed off the “world as straight man” angle of reality stunt faire harkening back to the best bits from Jackass.

Where the Evil Genius is a straightforward and brutally offensive joke delivery device, the Idiot Genius is nuanced character with a breadth and depth you have to approach brainlessly in order to comprehend. Tim and Eric, the love-or-hate sketch show from Nathan for You studio Absolutely, is another masterpiece of Idiot Genius. Tim and Eric delved deep into low culture to create some of the most stimulating 15 minute comedy shows of all time. There is so much anti-comedy packed into each episode you’re viable to notice something new even after twenty viewings (explaining the obsessive cult following of their fans).

I would conclude that more intellectual comedy comes from the Idiot than the Evil Genius. There’s something uniquely engaging and insightful about a character who is unaware of what the audience (pop culture or high culture) is aware of. This is the comedy of Mike Judge cartoons: Beavis and Butthead don’t realize that they’re unsupervised minors with terrible role models doomed to drop out of society; Hank Hill doesn’t realize he’s an uncultured hick in a one-horse town, and that’s what makes them funny. That’s also what makes them unapproachable. People often tell me they don’t get King of the Hill, but that’s because it takes self-awareness to be able to see what Hank doesn’t. For intellectual urbanites, judgemental observation is second nature but for others the deeper layers of  Mike Judge are just beyond reach.

Canada’s Trailer Park Boys gives us a motley crew of Idiot Geniuses to play off each other’s insecurities and flaws. Each episode pits one team of idiots (Ricky, Julian, and Bubbles) against another (Mr. Lahey and Randy). The sincerity of  Lahey’s superiority complex, in spite of the fact that he’s as deeply flawed as the criminals he’s compelled to harass, creates a laugh-inducing cognitive-dissonance in the audience: “I’m just like Mr. Lahey when I write the gang off as white-trash, but am I any better a person than he is?” A good idiot makes the viewer question what makes them idiots, and hopefully uncovers a the dumbness innate in all humanity, including the “superior” viewer himself.

Sometimes both Evil and Idiot work in collusion. In Tim Heidecker’s (of Tim and Eric) movie The Comedy, he plays a privileged Brooklyn hipster who skirts the line between the archetypes, and in doing so creates a drama that’s both uncomfortable and offensive at different times. Although from following Heidecker’s Twitter I can assure you that the comedian is much more evil than idiot in reality. I can sense the same thing about Fielder. There’s something inherently more malicious in pretending you’re dumber than you are than in trying to make yourself seem smart only by knowing what buttons to push. Oftentimes the evil comedian plays the idiot character, and the idiot comedian plays the evil character.

In the past, white dudes on TV had even less personality. They were dads, older brothers, or Uncle Jesse. They were flat-acted “good guys” with little depth other than righting the wrongs that the situation-comedy brings to the other characters. There’s still a place for the Andy Griffith good-guy in television, but since there’s still a white majority in television, these easy-to-write characters are increasingly becoming women and people of color. It’s an attempt to make shows with mostly-white-production for a mostly-white-audience seem culturally diverse without growing an awareness of cultures outside the Default.

Making white dudes villains and idiots appeals to white dudes most of all: we’re becoming more aware of our historical role as oppressors – and by cartoonishly mocking “The Man,” we can immunize ourselves against our own capacities for being evil and fucking everything up. Most of the shows I’ve evidenced have a primarily white audience, so making these characters appealing to people of color is not the intent as much as making white people feel like they aren’t racist and sexist – or that being racist and sexist is only funny and not offensive, in the case of Daniel Tosh. Being called a racist is one of the white man’s greatest fears, and if you don’t believe me try it yourself and see how defensive your bros get.

The dwindling diversity in white male leads means good and bad things: good that more complex characters are being written for a more diverse cadre of actors, bad that white males have less positive role models to emulate. The age of the white man as the mainstream villain is at hand (Django, anyone?), and the only question is where it will go from here.