Last month saw another heated Twitter conflict about rape and comedy between Jezebel’s Lindy West and comedian Roseanne Barr. It all started after a debate between West and stand-up Jim Norton on W. Kamau Bell’s FX show Totally Biased. The performance of the debate was lopsided (obviously a stand-up comedian has more public speaking ability than a blogger, though her points come through stronger in the extended cut) but the online aftermath should be nothing unfamiliar to readers of Jezebel, XOJane, or any women’s blog, really.

West has been the vanguard of this issue since it embroiled Daniel Tosh (for making comments about his audience gang raping a heckler during a stand-up set) and to a lesser extent Louis C.K. (who gave him ill-timed Twitter props that he then redacted, which inspired him to come out as an advocate for better judgement in comedy) last year.

If I can scrape the hate speech and trolling off this debate in order to summarize it: West and other bloggers think comedy is playing a key role in normalizing rape and Barr and other comedians think that nothing should be off limits in the pursuit of laughs. While it’s true that good comedy can come from being uncomfortable it’s also true that rape is a serious subject that shouldn’t be overexposed to the point that we’re culturally apathetic about it.

My personal convictions towards moderation compel me to make an attempt at balance between both arguments. I believe the best way to accomplish this is through the critical examination of individual rape jokes, instead of a broad and too easily dismissed critique of “rape culture” as a whole. With that I present two rape jokes, one that I think is terrible and one that I think is fine, and my reasoning behind my conclusions. 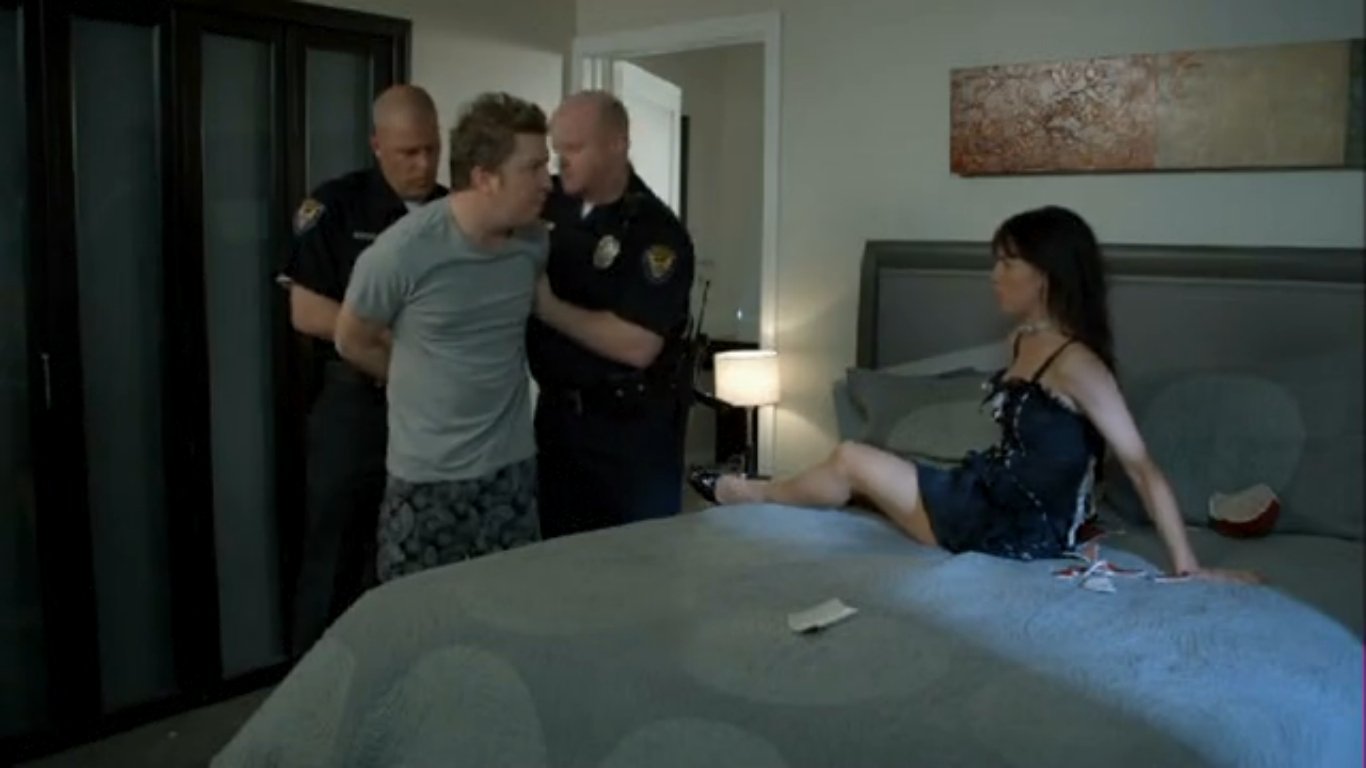 In the first sketch of this episode, Swardson plays a boyfriend who “attacks” his girlfriend (Natasha Leggero) during some sexual role-playing. His girlfriend goes over the top with screaming and fighting back and the sketch ends with Swardson being arrested by the police, girlfriend still going along with the act. Then she calls for pizza and casual asks to get raped by the delivery boy.

Why it’s not okay:

This rape joke, while seemingly just an innocuous study of bored couples, actually plays out an unrealistic and potentially damaging stereotype about rape and rape victims. A lot of the bros who are most dismissive of rape (and therefore more likely to commit it) share the common belief that women will use accusations of rape to get out of relationships, to get revenge, or just to manipulate men in general. Although that may be true for some crazy people, the girlfriend character is not really developed as crazy. For all intents and purposes the girlfriend was perfectly normal except for the role-playing. The sketch does nothing to confront the rape victim stereotype it plays on and only serves to reinforce it.

I’ll admit a bias here: I’ve never liked Swardson’s comedy. It’s brainless and lazy, but not in a fun way, only in an “Ugh, where’s the remote?” way. When this sketch came on I immediately sensed the unspoken implications it raised, and when the bit did nothing to address them I was so grossed out I actually turned off the TV (a rare occurrence).

In making a rape joke, I feel a comedian has to have both a men’s and women’s perspective. A grunting, ball-grabbing alpha male quip about rape is only funnier if it’s followed by a sharp counterpoint that comes from a place of social awareness. Comedians are really only cheating themselves out of quality laughs by blinding themselves to the female perspective, and in capitalist America they only stand to lose half of their available marketshare by neglecting to garner female laughs. 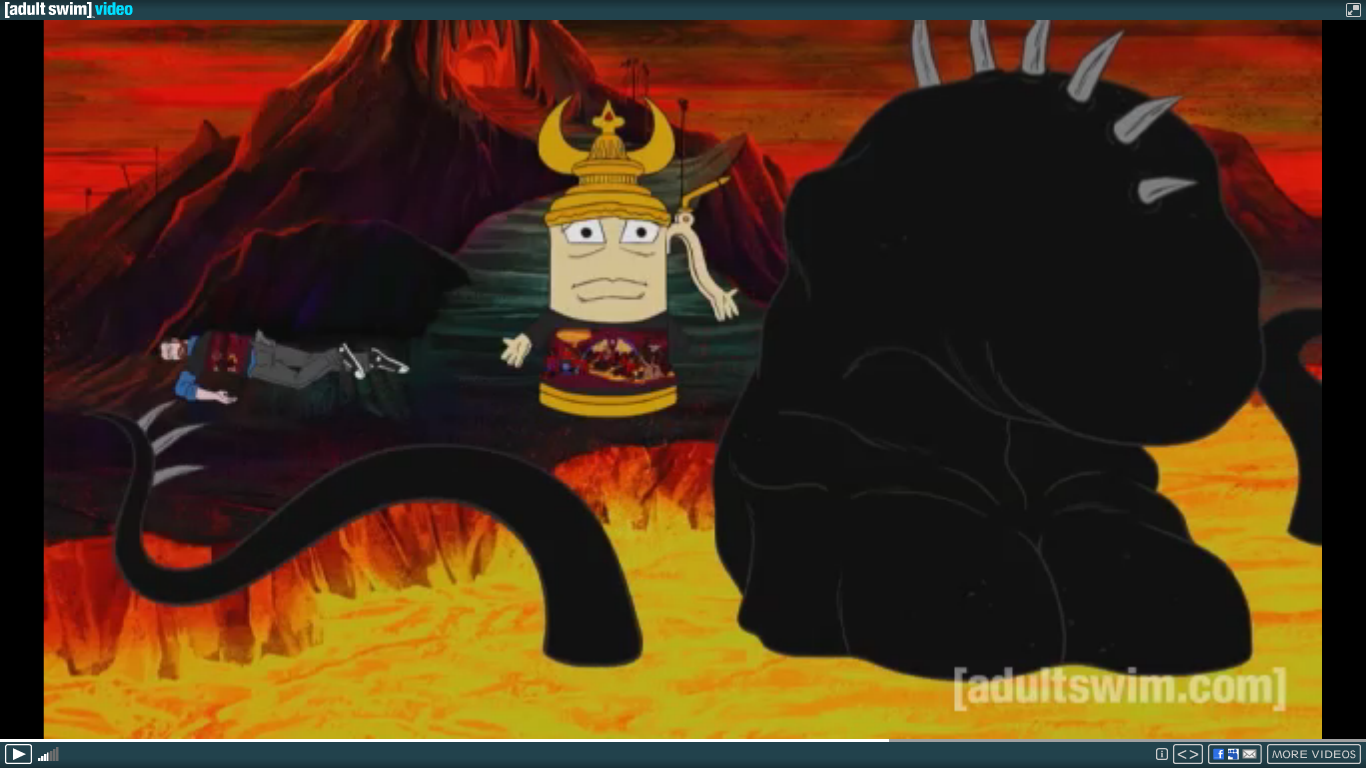 Aqua Something You Know Whatever Season 9 Episode 3 “Shirt Herpes”

In this episode, Master Shake inherits a heavy metal T-shirt that fuses with his body and transports him to the plains of hell every night when he’s asleep. His torture? An eternity of rape from a giant octopus. At the end of the episode, Shake’s long-term rape-relationship isn’t harrowing as much as it is unsatisfying (“For once, I’d like to look you in the eyes.”) and it plays on the stereotypical struggle of a wife whose husband is a selfish lover.

For rape victims (or anyone who suffers from PTSD) it’s important to avoid “triggers”, or situations and images that could cause debilitating flashbacks to the traumatic event. Just like a veteran would likely want to avoid watching a war movie, a rape victim would probably want to avoid most comedies with AXE body spray commercials (the most obvious signifier of low-brow bro-gramming), but Aqua Teens and other Adult Swim shows prove that it’s possible to make a show that’s marketable to young men without content that’s destructive to women. The scenario for this octo-rape joke is based in surrealism, and is unlikely to be a trigger for anyone, except maybe an extremely unfortunate Sea World employee.

Aqua Teen is a show with an all-male cast that has a gender-inclusive appeal. Although the main character (Shake) is a self-aggrandizing d-bag who fancies himself a player, the show’s writing comes from perspectives outside that character and is written with enough cultural self awareness to be capable of successfully pulling off rape jokes like this (see also: Season 4 Episode 5 “Handbanana” an incredibly funny episode about rape). Again, I’ll admit bias. I’ve been watching Aqua Teen since it first aired, and although not every season is consistently entertaining, these types of jokes that absorb a controversial subject into a deep pocket of absurdity keep me coming back.

There’s also something to say about rape jokes where males are the victim. Jokes like that challenge preconceived notions about gender-power dynamics instead of reinforcing stereotypes about who rapes and who is raped. That’s not to say all jokes where a man is raped are inoffensive, South Park’s Season 12 Episode 8 “The China Problem” is one example of rape joke with a male victim that’s in incredibly poor taste. Writer Trey Parker superficially equates the fourth installment in the Indiana Jones franchise to rape (a bad movie and a life changing traumatic event are seriously inequitable), and the show features multiple graphic recreations of rape scenarios wherein George Lucas and Steven Spielberg gang rape Harrison Ford’s character.

From these examples I hope I’ve made it clear that a permissible rape joke 1) doesn’t come only from a man’s perspective, 2) doesn’t reinforce damaging stereotypes and 3) doesn’t recreate realistic rape scenarios. Of course I’m sure I’ll find exceptions to these rules as well as more rules that I haven’t come across yet (allow me to introduce you to the comment box below), but this is a necessary start. It goes without saying that all rape jokes are in poor taste, but we all know poor taste has its place. I only urge the consideration of these criteria before saying something you know you’ll regret.

There is a historical precedence for banning hate speech that this issue approaches. In some cases, FCC restrictions may be needed. I am not typically an advocate for censorship, I think as individuals in society we should exercise enough willpower not to let it get to that point. It’s not the place of the government or the conglomerates that control the media to tell us what we should and shouldn’t watch on TV. Instead it’s our responsibility as consumers to make decisions for ourselves about what does and doesn’t have socially redeeming value. But in times where informed people can’t successfully catalyze awareness for the masses, censorship is a reserved last-resort.

When you do find a rape joke on TV that you hate the best thing to do is just turn it off (as comedians who have come out in support of rape jokes will instruct you to do). But that’s only the first step. The second step is to tell the internet. Blog culture has sunk its teeth deep into the rape joke debate and changed the dialog for the better, with much more comprehensive and reasoned coverage than you can expect to find on TV or in print. God knows the NSA is listening, hopefully the programming executives, writers, and producers responsible for making television are too.